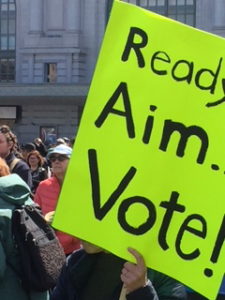 “Watch out Congress the Youth are on their way.”

“Our lives begin to end the day we become silent about things that matter.” “Enough is Enough.” “Congress: Value kids’ lives more than NRA $.” “The Second Amendment says: A well regulated militia…Well Regulated!” “Students should worry about APs not AR-15s.” “No child should live in fear.” “NRA = Death.” “Republicans: How many dead kids until you say NO to the NRA?” “Guns have more rights than my uterus.” “We the people must repeal the Second Amendment.” “Ready Aim VOTE.” “I was trained to be a teacher, not a sharp shooter.” “Books not guns! Culture not violence!” “Stand up, Speak out, Protect kids, not guns.” “The Power of the People is Greater than the People in Power.” “Love People, Not Guns.” “Vote out NRA Pawns.” “Arms are for Hugging.” “I am no longer accepting the things I cannot change, I am changing the things I cannot accept.” “Congress: How much NRA money is worth the blood on your hands?” “The only way to stop a Bad guy with a gun is a Good guy with a Vote.” “In America Women’s Bodies are more Regulated than Guns.” “Educate, Agitate, Organize.” “Respect Existence or Expect Resistance.” “Black Lives Matter.” “The People United will never be Defeated.” “Ban Assault Weapons NOW.”

“Which side of history are you on?”

“…and still can’t believe it.”
IN THE TIME OF MY LIFE: Selected Writings