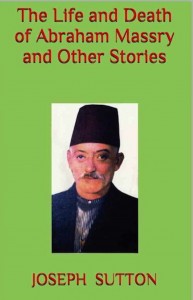 By  Jonathan Farrell of Digital Journal

The life and work of a writer is often a mixture of fact and fiction. Yet for many writers some of the best stories they share come from real life, especially their own. This can be said of San Francisco-based writer Joseph Sutton who has recently published a semi-autobiographical work called The Life and Death of Abraham Massry and Other Stories.

This is Sutton’s tenth book, a collection of eleven short stories based on his Syrian Jewish background. The title story, “The Life and Death of Abraham Massry,” is about a Jewish immigrant from Syria who wants his son Jake to follow the business and marriage path taken by him and his ancestors, except Jake shows the true calling of America by blazing his own trail. Sutton admits there is a lot of him in the character of Jake Massry.

There are stories about Jake growing up in the wide open spaces of Los Angeles as compared to Brooklyn where most of the Syrian Jews live and who still cling to the religious and cultural customs of the past. When Sutton would visit relatives as a kid in the very close-knit community in Brooklyn, the contrast was something that made a great impression on him.

There were two groups of Jews who came to the United States from Syria, one from Aleppo and the other from Damascus. (Sutton’s father came from Aleppo, as did his mother’s parents). The bulk of the Syrian Jewish migration took place between 1900-1920s. At first the two groups did not assimilate well with each other, nor did they assimilate with the Yiddish-speaking European Jews who didn’t consider the Arabic-speaking Jews as Jewish because of their different language and olive-colored skin.

Eventually, as time went on, more was shared in common with the two groups and the Syrian Jews as a whole became a distinct part of Brooklyn and its surrounding areas. This is something Sutton makes note of and why he often ponders what his life would have been like if his parents had remained in Brooklyn’s close-knit community. “I am not a religious person,” said Sutton, “and it seems to me that everything the Syrian Jews did revolved around the strict practice of religion and adherence to tradition. If my parents had not left Brooklyn for Los Angeles when I was a year old in 1941, who knows, I might have grown up to be as religious and traditional as Brooklyn’s Syrian Jews.”

Sutton’s stories provide a rare glimpse into a unique group of people in the history of 20th Century America. Other authors have provided views into the complexity of their cultural and religious backgrounds. One that comes mind is Woody Allen’s film Radio Days.

With a mood and demeanor a bit like Sholem Aleichem’s tales, upon which the Broadway musical Fiddler on The Roof is based, and with perhaps a touch of the human-struggle and humor of Neil Simon’s plays mixed in, Sutton hopes people will enjoy Jake Massry’s Syrian Jewish experiences from boyhood to manhood.

“I wish I had written it.”
“…love letter to baseball.”