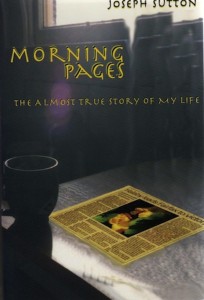 What is the writer’s method? How does a writer get strings of inspired words from his mind onto the page? Not very damn well if you’re Ben Halaby, who’s filled with dedication but grappling with writer’s block. Halaby stumbles across a book on creativity: Julia Cameron’s The Artist’s Way. The basic principle of Cameron’s book is to write three pages nonstop first thing in the morning for 84 days. Halaby heeds Cameron’s advice. And what we see, as the words come gushing out of his pen and his soul, is not only the creative process in action, but we see a man turning into his old storytelling self again.

Yesterday I visited San Francisco’s Youth Guidance Center, which is another name for Juvenile Hall. A friend of mine works there as a probation officer. His name is Jack Jacobs.

Jack, who looks like Rasputin with that long, pointy, gray-black beard of his, was wearing jeans and a powder-blue baseball warm-up jacket. On the back of the jacket in yellow block letters were the words STOP THE VIOLENCE.

We sat in the hallway on a bench and talked about his job. “Fifty percent of saving these kids comes from the heart,” he told me, holding his hands to his chest. “There’s no other way, Ben. It has nothing to do with reading books, having a Ph.D., or knowing how the criminal mind works. It has to do with compassion. It’s being honest with them and holding them accountable. The rest is easy. You have group meetings and try to instill hope in them.”

He went on to say, “It’s when the boys are behind bars that they start reading, thinking, and reflecting. It’s in here that they find out there’s more to life than drugs, gangs, and hopelessness.”

I’ve known Jack since we worked together at Potrero Hill Middle School more than fifteen years ago. “Who’s your favorite teacher?” I remember asking a class I was substituting for, and half of them gave Jack’s name. The thing is, Jack wasn’t even a teacher. He was a hall guard, a person who roamed the halls and yards, found kids cutting class, and talked to them about not wasting their education. He’s always given his life to kids. He’s always had compassion for them.

Jack invited me to a group meeting that he presides over once a week. We walked through a maze where he had to unlock five doors to get to where we wanted to go. And there we were: Jack, me, and thirty-five teenagers—mostly black, some Hispanic, a couple of Chinese—crammed into a hot, humid classroom.

Jack stood in front of the boys, a green pen in hand, and he began the meeting by saying, “It’s absolutely wrong to assume that a criminal shows no fear. People who carry guns are actually afraid. Instead of picking up a gun when you leave this place, pick up a pen. This,” he said, holding up the green pen for the boys to see, “is the instrument that can change your life and give you power.” Then he dropped it to the gray linoleum floor. He didn’t even attempt to pick it up. I couldn’t figure out why until the meeting had ended.

He then turned the meeting over to the young men in the room. A dozen of them, one at a time, stood up and tried to impress upon their fellow inmates that they were going to steel themselves against the negative and embrace the positive when they got outside.

“It ain’t gonna be easy goin’ straight,” one of them said, “but I’ll be damned if I’m gonna get locked up behind these fuckin’ bars again.”

Another said, “You feel like you groovin’ when you high on drugs. You feel like this is the life, man, this is what it’s all about. But that kinda life ain’t worth shit. It’s for losers, man. And none of us in here are losers if we don’t wanna be.”

Another boy stood up and gave a rap that went something like, “You think you big when you carry a gun/You think you weigh a whole wide ton/Well, get off the fantasy, brothers/Get off your ass and start carin’ for your mothers.”

The boys really meant every word they said. They were trying their damnedest to talk themselves into going straight upon release. But how many of them are really going to change their ways on the outside? My guess is that a very small percentage will. Jack would argue with me until his face turned blue that every one of those boys has a chance of making it on the outside. And rightly so. That’s why we should be thankful for people like Jack Jacobs. He’s committed himself to resuscitating hope into those troubled young men. His faith in them is uncompromising.

Jack’s pen was still on the floor when the meeting ended. As the boys were filing out of the room, a skinny youth bent down and picked it up.

“Keep it and use it,” said this man with hope in his heart.